He used to be in my grandmother Aggie’s dining room.  He sat in the dark on a heavy mahogany sideboard.  There was enough light for me to see holes that lead inside. They frightened me, or he did.

He was “a temple ornament” Aggie told me without the slightest sense of shame or embarrassment.  I believe he was stolen from somewhere in India and sent to the West to be sold.  What gash was left behind when he was removed can’t possibly be ascertained.  (Plaster with polychrome glaze, clumsy repairs.)

Aggie was born an upper middleclass white woman in Virginia in 1878 and I’m sure she never gave a thought to how or why any of the ancient art came to be in the British Museum or the Metropolitan or the National in Washington, let alone this piece which she bought in an antique shop somewhere. Relics like this are preserved and honored in the West as they might not have been in their home countries, she might have said.  I learned later that an eerily parallel belief buffered Southern white guilt about the capture and enslavement of black people: Better off here, where they have bibles and underpants, than in their home countries.

We didn’t discuss him.  I didn’t ask her why his body is so glossy brown, why he has horns, why his skirt and cape of leaves are so blue, and what those animals and the headless white man are doing at his feet.  Very likely Aggie didn’t know.

Is that bright blue circle behind his head a halo or part of an elaborate ceremonial seat?

After my grandmother died, he ended up in my parents’ house, presiding over the counter that separated the kitchen from the dining room, just where my father always set out the cocktail-hour bourbon bottle.  I think my sister was the first to add a few drops of alcohol to the tiny white bowl on one side…and much much later my daughter Hetty made the miniature blue bowl that now sits on the opposite side. 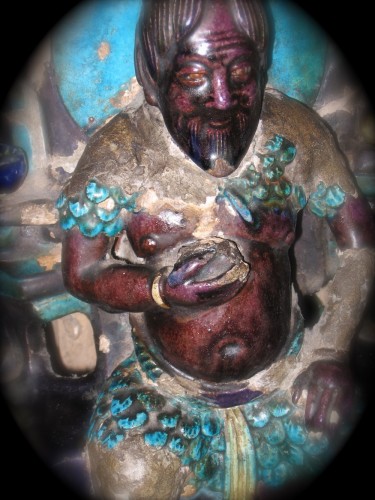