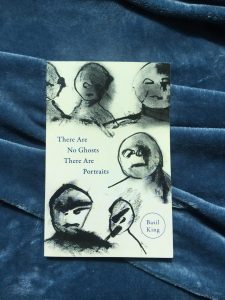 Basil King’s book There Are No Ghosts There Are Portraits is finally here.

Co-published by Pinsapo and Lost & Found, CUNY Document Initiative with an introduction by Ammiel Alcalay, and edited with an afterword by Öykü Tekten, this book is truly a gem.

This reading and book launch will inaugurate Lost & Found: The CUNY Document Initiative’s new collaborative partnership with Pinsapo Press presenting our first co-publication There Are No Ghosts, There Are Portraits, an exciting new book by Basil King.

“[…] each of the texts included here — taking up figures as disparate as Billy the Kid, poets Samuel Greenberg and Isaac Rosenberg, painters Velazquez, van Dyke, Rubens, Soutine, Modigliani, Chagall, and so many others — seem to have been poured through Olson’s alembic, his “Special View of History,” as Basil punctiliously records and juxtaposes the facts “that matter,” so “fact can be fable again.” Like the vast visual and textural vocabulary of his paintings, Basil King’s latest textual landscapes portray worlds torqued into collision and relation, close to the bone and heart, close to our own felt ways of knowing. Work so condensed to its essential elements is all too rare, and the formal effect of these writings is overwhelming. Basil King’s There Are No Ghosts, There Are Portraits is a treasure that deserves both our attention and study.”

A wonderful book. It is natural and straightforward in form and supernaturally brilliant in content. The voice is just right throughout. Thank you for getting it all down.
—Raymond Foye

King doesn’t just see everything (in his field of vision) but he wants to see everything. Surely what King has accomplished in this book (as well as his other accomplishments as both writer and a visual artist) would not have been possible without such an immense desire.
One of my favorite passages from the book is “Autobiography has more than one ambiguity.” The line keys up the reader for what will be, as they say, a killer ending. I won’t share the ending but I will share its hard-earned last sentence. One hundred fifty-seven pages led to this sentence and by reading this sentence, I hope you will be encouraged to seek out this recommended book: Why do people go to war
—Eileen Tabios 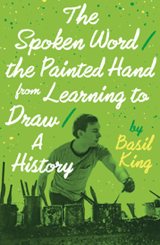 … Elegant in its structure… a montage, yes, of memoir, history, art history, art criticism, philosophy, poetry.  And by elegant, or cool, I mean the proximity of all the reflections is beautifully paced, not only by the ‘pauses’ but by the paragraph breaks, never jarring.  And the writing is flawless
—George Stanley

…King takes us along to examine how widely variant strains of data reverberate and pummel, as Lana Turner weeping, out of control, hurtling through a colossal rainstorm in Beverly Hills, crashes through the formal jigsaw of Vincente Minnelli’s The Bad and the Beautiful and wakes us to life.
—Kevin Killian

In his essay on why the miniature is as important as the mural King insists that light abstracts the smallest thing. …The impact is cumulative and thoughtful, allowing a larger picture and frame of reference to emerge and yet still allowing for the smallest of details to have impact.
—David Caddy, Tears in the Fence

This artist’s word ‘perspective’ is what King brings to his vivid, hybrid writing. It is the perspective of someone who has been trained not just to look but to SEE, and not miss anything in his field of vision. Full of jump cuts and precise depiction, King’s work here always yields what his old now departed friend Amiri Baraka called emotional validity.
—Ammiel Alcalay 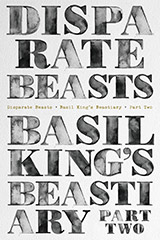 Review of Disparate Beasts and a reading

May be my favorite Basil King book so far. All the disparate strands weave in and out, figures like Cranach and Kline and Nijinsky hiding and reappearing…. A little gossip, some humor and poignancy– and I learned a lot.  Calling Frederick Law Olmsted an Impressionist and comparing him to Monet is brilliant. — Michael Seth Stewart

The book picks up themes begun in 77 Beasts/Basil King’s Beastiary.  Once again the fabulous beasts are artists both past and present channeled through fellow artist Basil King’s empathetic imagination. He writes: “At age 50 the poem and the painting became one continuous scroll that like Asian and Semitic scrolls tell stories as they instruct my Torah is endless.” 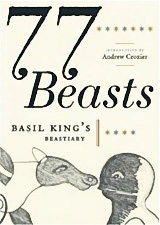 Its rich detail doesn’t stale on rereading but underlines King’s skill as a writer in matching technique to what he has to convey, or with local detail dovetailing connections between one painter and another. It’s a book too immediately attractive to deserve having its strength and subtleties explained in advance.
—Andrew Crozier, from his Introduction to 77 Beasts
⬷more⤐ on 77 Beasts

Learning to Draw: A History 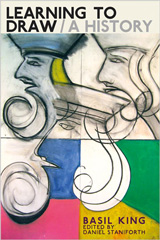 What enchanted me was the fact that the work was such a free-flowing & compendious meditation on aesthetics & history, moving as the mind does, from Stieglitz to Leonardo to Pound to Black Mountain to Kline to Lindbergh to Breughel to Whitman to Gertrude Stein to Walker Evans and so on.
—Colin Still, filmmaker and principal of Optic Nerve.
⬷more⤐ on Learning to Draw

Mirage: a poem in 22 sections 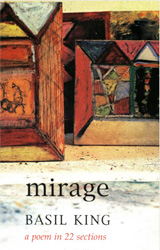 As a long poem, Basil King’s Mirage never flags… [He] recounts amazing stories contained in prose passages that break into the poetry like bedrock beneath a mountain stream. The title, Mirage, perhaps refers to the elusiveness of truth as time overwhelms our personal and public histories. Any reader with an interest in recent American literature and painting will be especially enamored with this work.
—M. L. Weber, American Book Review

Essential symmetry of experience which has gone against both the metronome and arrhythmia and beyond the ornamentation of inessentials in so much present writing. It helps to have had one’s hands covered with paint. Someone, after a long life, is standing at the door of some facet of wisdom.
—Nathaniel Tarn

I’m awed by the simplicity and strength. [Basil King] does write like a painter, not simply with colors, but strong strokes here and refrains of blue there.
—Lucia Berlin 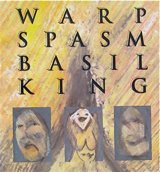 How to describe Basil King’s life’s work? Poetry? Fiction? History? Autobiography? And what of the intersections with his fascinating drawings? Warp Spasm continues this unprejudiced investigation — a weave of signs in a field, ever flexing to accommodate observations drawn from many times, voices & lives variously lived. In an era of rabid imperialism & cultural banality, this is the work of a man whose appetite for the fabulous life of the arts remains ablaze.
—Michael Hrebeniak, editor Radical Poetics, U.K.

These Chapbooks are out of print. To locate copies, please consult sites that specialize in rare literary publications such as Biblio.com 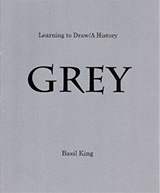 This is the latest chapter in Basil King’s Learning to Draw/A History epic, just in time for the new year “Every artist finds his own gray” writes Basil King, but for Baz, the British kicks in:  GREY.

“John Wieners faced the page and told the messenger I will not atone. I will not repent for loving death’s disapproval.”  Others in this poem include Jasper Johns, Rauchenberg, Twombly, O’Hara, Martha King, and their daughters, Mallory and Hetty King, when very young. –Mark Lamoreaux 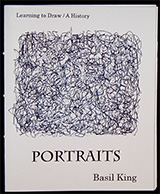 Before I began reading grown-up books, most of what I knew about literature came from a card game called “Game of Authors.”  In this installment of his epic “Learning to Draw / A History,” Basil King likewise stacks his own deck of historical personages.  Like King’s exquisite line drawings that accompany the poems, the Portraits offer intimate yet enigmatic limns of such luminaries as Charles Darwin, Joan Mitchell and Amiri Baraka and follow a thread through the labyrinth of our intellectual history looking for the bull-headed genius of vision — Mark Lamoreaux 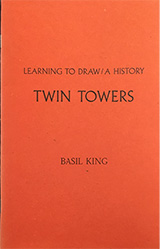 “The surreal knocks.”  In another segment of Learning to Draw/A history, Basil King takes on the enormous subject of the attack on New York’s Twin Towers by ranging from personal memories of his childhood in London during World War Two, his experiences in Brooklyn on the day that event unfolded, and projections about how other people responded, from a fireman’s widow to Casper David Friedrich, to Mark Rothko, to contemporary Orthodox Jews and Muslims.  “What you see is not always what you feel,” Basil writes. 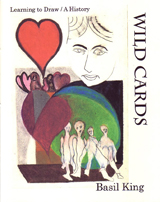 In “Wild Cards,” Basil King gives us art and history from street level.  Monet, Manet, Blake and others are face-cards in his full hand & hands.  King  builds a Japanese Bridge between word and image in this section of his epic Learning to Draw/A History.  Accompanying the text are four full-color plates of King’s own paintings from the “Blackjack” series.  You’ll lose your shirt. — Mark Lamoureaux 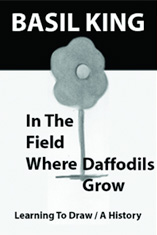 In The Field Where Daffodils Grow

This is another installment in a body of work that Basil King has established, mixing poetry and prose, personal memoir and aesthetic rumination. King, who started and remains a painter, has gained a loyal following for his writing and public appearances. This chapbook begins with ah mediation on Marsden Hartley and continues, gaining momentum, as the writer considers in a personal way the relationships of Pound, H.D., and Williams passing through Giotto, Rembrandt, and Nijinsky to Virginia Woolfe and her sister Vanessa Bell.  Most poetically, he presents a portrait of Emily Carr, a painter and kindred spirit.  –Vincent Katz