The James and Mary Laurie Booksellers, 250 Third Avenue North, Minneapolis, MN, couldn’t have been a more hospitable place for poets to read. 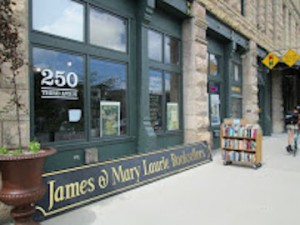 Special Commemorative pamphlets of work by the poets, prepared by Kimberly Lyons and printed by Ann Elliot of SoHo Letterpress in Brooklyn were distributed at the reading: Folded Silhouette (everyone in the group) and A Pigeon in Delacroix’s Garden (B.King and C.S. Giscombe only).

Some of the Laurie Booksellers wares can be found on their website:  If you aren’t near Minneapolis, try  www.lauriebooks.com