In a folder marked Basil’s dream

Baz and Robert Creeley were together, he visiting Creeley’s house, and Creeley had taken him out onto a large veranda or open porch where they stood together looking down into the yard as a bear, a male bear (I questioned Baz about that), wearing a white apron, but not cute, not Paddington or Winnie-the-Pooh but a large wild bear, walking upright, and wearing a white apron, walked from the woods through the yard, climbed up a large tree, and halfway up, stopped, yanked from the trunk a knot, carefully lowered himself a way down, then jumped rather gracefully to the ground;  whereupon, carrying the knot in his forepaws, he returned, retracing his steps, to the woods.  Baz and Creeley, both delighted, laughed. 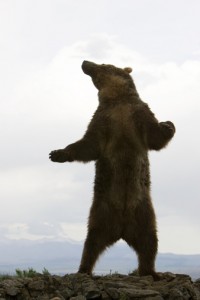 And in the same undated file folder

(who wrote quite a bit of poetry before she was 12 when dancing became her main focus.)