There are a few of Basil’s baseball paintings on the Art page, main website. “Pastorale” turns up in several of his poems…

In the late 1970s, when Basil’s studio was on  Hudson Avenue just up from the Con Edison plant on the Brooklyn waterfront, I was working as an editor at Sloan Kettering, where the employee picnic at Shea Stadium was a summer event. We always opted to go.  The hospital reserved the entire backfield bleachers and fans from hotshit surgeons and revered cancer researchers to cafeteria workers, porters, night nurses, and billing clerks all packed in.  There was a fair amount of illegal boozing throughout – and abundant stadium food on offer in the private picnic ground directly behind the bleachers.

By 1981 Baz was painting baseball. 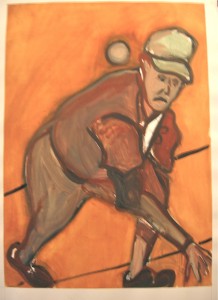 Our old friend Dave Wyland was a photo editor at Newsweek then, and he’d periodically bring Baz amazing baseball photos – outakes  from the wire services.  We started watching games on TV.  (Not quite the same.)

Baz was never a fan of any one team. Me either. We both like the narrative whole, the biographical curve of this one and that one.  Baseball has space for it. Here, there, around the players, between the action, over the playing field.  We get to see their bodies, learn their names.  We recognize faces, tics, moods.  As I get caught up in the game of the moment, I can form a brief commitment to a team.  Promiscuous it’s called.  It never lasts. And sometimes I don’t care who wins at all.  Except for the Yankees. I hate a lot of things about my native South but rooting for ‘yankees’ would be too weird. The Steinbrunner tyranny cemented that for me.  Yankees, no. Not never.

Sorry we’re missing a useable image of “Throwing the Moon,” done from a photograph of the great Tom Seaver. Color slides degenerate, as do color photographs.   Even those stored in the dark, in archive quality plastic sleeves.

Happily the original paintings are safe.  They are pampered, air conditioned – and shockingly bright and clear when stripped of their protective wrapping.  We keep them at Crozier’s art storage warehouse in Newark. Except of course for those that have been sold. I never worry about them! 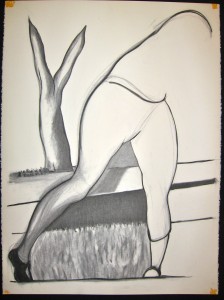