deKooning’s women get him out of the closet but do you notice that these violent creatures all sit, sit quite still.  They don’t move head, hand or leg. Eyes and teeth move. And the color rages. But they simply sit in the closet that he has left.

Oh how that man loved pink and how he fought his mother!  It was plenty hard, that’s clear.   But enuf penny-ante psychoanalytics.  It’s not his psychological struggles that so interests me.

You see him still sail American space in a European boat.  And make all kinds of landings. The possibilities of!

And yet.  We are, in the last room, left to speculate on what remains when the essential anger burned away.  Some crave that burning away and seek it on purpose through various practices.  For deKooning it seems not to have been his pursuit but neuronal loss from aging and disease. The causes are not as commanding as the evidence. What we can see.  Not expected sentiment, or sublimation, or that slippery thing called spirituality,  not “the formal feeling” after great pain, not at all.  Instead space as a physical joy—the swift sweet curve, the cool wind, the feel of paint leaving the brush and making its luscious track.  Pink.   This was a retrospective deserving of the name because the whole spectrum of the artist’s life was presented, the editorializing minimal, and the art allowed to speak. 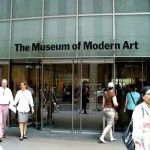