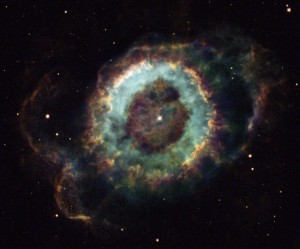 “Nothing’ is the force / That renovates the World”    –Emily Dickinson, by homely gift and hindered Words

I said about nothing

only that They guess it’s dark

because light is something

They say most of everything is dark

seventy percent of everything and it’s gaining

so five percent is the what else we love or not

jusst five the something:  the light, the obdurate rock, the soft skin, all

But only for now

I was right about that

one nothing swells as the other nothing shrinks

All nothing actions are

or a burst of synaptic joy

We get it really!

Who do you think you are to

is all there is

to be afraid of

Note on the photograph: it is NGC 6369: The Little Ghost Nebula.  Credit: Hubble Heritage Team, NASA.  From  APOD.nasa.gov (Astronomy photo of the day) – free daily photos. This one, cataloged as NGC 6369, was discovered by Basil’s namesake, the 18th century astronomer William Herschel.  (Yes, his full name is Basil Herschel King.) This nebula in the constellation Ophiucus is relatively faint and has acquired the popular nickname Little Ghost Nebula. Planetary nebulae like this one are, in general, created at the end of a sun-like star’s life as its outer layers expand into space while the star’s core shrinks to become a white dwarf. The white dwarf star, seen near the center of this image, radiates strongly at ultraviolet wavelengths and powers the expanding nebula’s glow. The nebula’s main ring structure is about a light-year across and the glow from ionized oxygen, hydrogen, and nitrogen atoms are colored blue, green, and red respectively. Over 2,000 light-years away, the Little Ghost Nebula offers a glimpse of the fate of our Sun, which could produce its own planetary nebula about 5 billion years from now.