Filmmaker and poet Julian Semilian screened the film for his students in experimental film at the University of North Carolina School of the Arts (Winston-Salem). (The school’s ‘movie street’ is seen above.) He sent these comments:

I can see why Nicole insisted on blu ray. It looked spectacular. It also made a huge difference seeing it on a large screen.

This is the first time that my students were THAT talkative after a movie. One of the comments was that this was a film made by an artist about an artist. They emphasized this more than once.

We had looked at films about other artists (Motherwell, Rothko, Bourgeois, Eggleson, Robert Frank) but never before did they feel that involved. The main thing…they liked was that the filmmaker stayed out of the way of the subject….They loved the construction, blending the art with Baz’s reading of his auto-biographical poem, so that we get to know the fusion and mirroring of Baz and art. And they really appreciated seeing the art so large. At the end…I spoke to them about Black Mountain (only one student knew a little about it), some of the other principal characters, and about Frank O’Hara. Next week I am going to read them some O’Hara poems. All in all, a splendid evening. I felt happy and proud to make a connection between the generations. 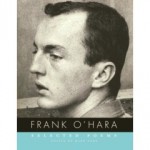