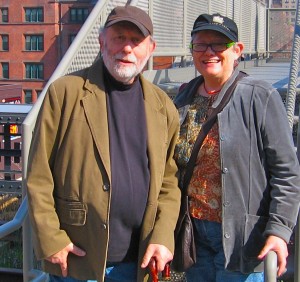 First of all, Brookes Oxford is a new university in Oxford, not the ancient dreaming spires establishment.  It was named in 1992 to honor its first principal … but was previously known as Oxford Polytechnic and before that as the Oxford School of Art.  A hundred years old and today quite new. Today’s university is exploding with students from less than privileged England and from all over the post-colonial world. They are taking high-tec courses in architecture, engineering, research, computer sciences, web design and, as ever, art.

But a multimedia sculptor on the faculty told me he hears students say they’ve chosen to study art because they didn’t know what else to do.  Almost a diagnostic of  contemporary discontent.  (What are we doing? Why?)

Sussex is older and younger than Brookes.  It was the first of a wave of British universities that opened in the 1960s, full of enthusiasm for exploring new relationships among teachers, learners, and the materials they might choose to draw from.  Fifty years on, it still attracts left-leaning politically progressive students, many of them readers and writers of poetry, but it is very very far from operating with a disseminated power structure, and for being a face of changed possibilities.

We presented Black Mountain Trace:  Martha King and Basil King at these two campuses in addition to our events at Kent University and Veg Box/Free Range. (See earlier post.)

We both read from our work, we screened Basil King:MIRAGE, Baz spoke about Olson’s classes and read his introduction to Charles Olson at Goddard College (from Cuineform Press, documenting a three-day Olson class in Olson’s own words).  And we screened the 10-minute version of  George Quasha’s tape, Basil King: A speaking portrait. At Sussex we had two hours in a dauntingly enormous amphitheater.  But it filled with 75 or 80 students, many of them already familiar with Black Mountain writers.

A titter ran across the audience when I broke from my reading to recommend John Wieners’ work.  Later, I was told the school has a corps of Wieners admirers, some of whom know all the Hotel Wentley poems by heart.

We had two hours – and then the event repaired to an on-campus pub.  We were mobbed.   Finally Daniel Kane, head of American studies and our host, pulled us away, stuffed us into a cab, and took us for a wonderful but much quieter dinner at a pub in Brighton.

At Brookes Oxford we had three hours, and could present all of that, with longer readings by us both, and a 30-minute excerpt from Cathryn Davis’s film Fully Awake: Black Mountain College which we’d shown at Kent.  (For more about this film, visit http://fullyawake.org/    Not only are we among the interviewees, but the focus of the film is the school as school, what it was like to be a student there in the several Black Mountains that made up its short history, and what was carried away by students as memory and personal process. )

When the Brookes bell rang signaling 4pm, the end of our session, only some of the audience got up to go, apologizing several of them. They nailed us for telling them that Black Mountain had no set end times for classes. At BMC if something was happening, everyone stayed, stayed until the subject  -or the people-  were depleted. Or until a natural end.  We couldn’t quite do that at Brookes…in part because our energy ends before subjects do, and in part because the room we occupied was assigned to something else at 5pm.  Our host whisked us away for hot coffee and Panini, which we badly needed.

The bigger question from all this is why U.K. students in three different institutions (and others elsewhere?) are looking with such interest at poetry written 60-some years ago – and expressing instant enthusiasm for Basil’s current work which was totally new to almost all of  them –  as well as responding to our BMC recollections. 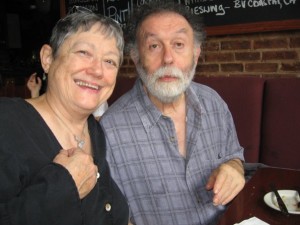